If you are looking for a retirement or graduation gift, there is no better item than an antique pocket railroad watch. Although some people may not be very familiar with the true value of such an item, it is sure to be appreciated by anyone. The truth is an antique pocket railroad watch is really quite expensive. Nonetheless, there are fairly good reasons why you should spend a bit for such a gift.

The late 1800s was the period when trains were the primary mode of transportation. Aside from moving people from one point to another, trains also carried valuable goods for trade and industry. This was one of the main reasons why a typical conductor railroad watch now known as an antique pocket railroad watch was important. There was however, more than just punctuality at stake. Railroad watches had to be in good working order to ensure that no accidents happened.

There were literally hundreds of trains to manage almost everyday. It was important that they all kept the right time. Otherwise, trains could collide when tracks switched as scheduled. In 1891, such a collision happened in Kipton, Ohio just because a conductor’s watch was late by four minutes. To prevent further incidents from happening, the government gave the order to come up with standards for railroad pocket watches.

Of course, a collector could also treasure an antique pocket railroad watch not just for its unique level of craftsmanship. An antique railroad watch can bring back the romance and simplicity of the old days.

The general standards for railroad watches were widely known in 1893. These general rules however were frequently improved and modified. Some watch companies also produced pieces that were far superior to standard watches. You should therefore learn to evaluate your antique pocket railroad watch based on who made it and the standards on the year it was made. There are things you should have in mind when assessing an antique piece:

1. When one speaks of the size of an antique pocket railroad watch, what is referred to is not the actual length or width but the size of the movement. In the beginning, the standard for a railroad watch was size 18. In the early 1900′s size 16 became a popular option.

2. The second main point to consider in an antique pocket railroad watch is the components and characteristics. Your pocket watch should be temperature compensated and should be adjustable in five positions. It should have 17 or more ruby toroid jewels, a winding stem positioned at 12, a double roller, a lever set, a regulator and a steel escape wheel. It should also have Arabic numbers on an open white face. 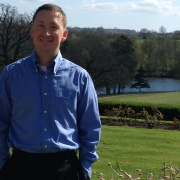